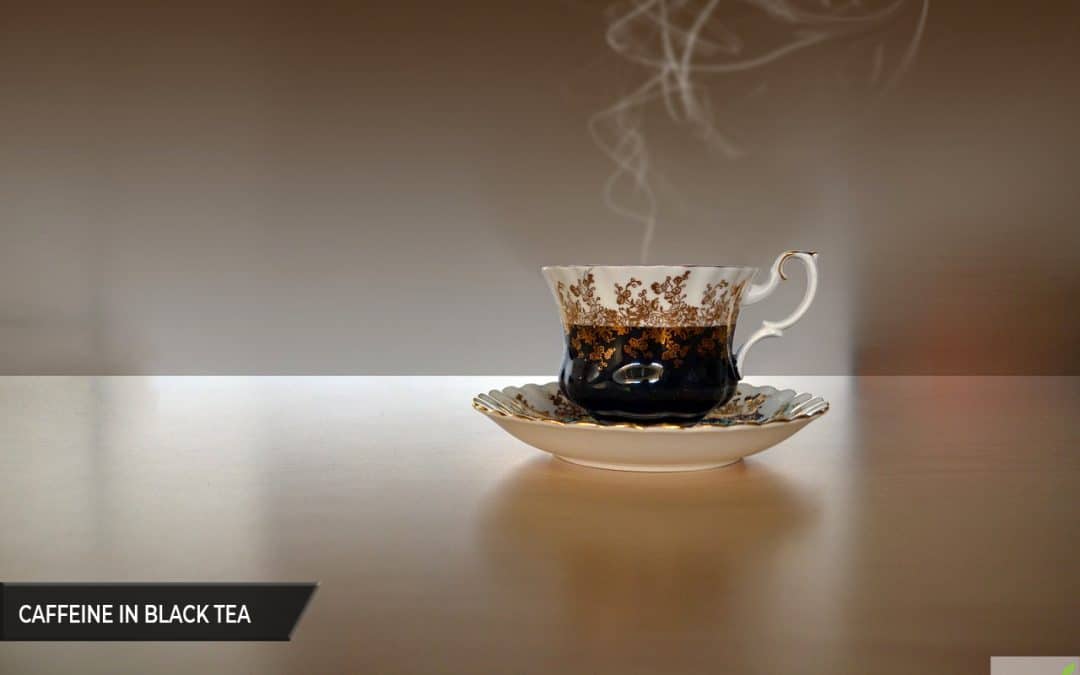 It might not come as a surprise for you that there is a significant amount of caffeine in black tea. But is this amount enough?

Mornings are hard. Sometimes we need a little boost to encourage us to get out of bed. When we are tired and still groggy, something caffeinated in your cup can feel like a lifesaver.

Coffee is a popular choice but has little redeeming value to it. Black tea, on the other hand, offers nutritional value. It is full of antioxidants, vitamins, and minerals.

It can help you with weight loss, improve your gut health, improve brain function, and lower your blood pressure. Sometimes, though, you just want your daily infusion of caffeine.

How Much Caffeine Is in Black Tea?

It is generally accepted that an average cup of black tea contains around 47 mg of caffeine. The exact amount of caffeine in black tea is variable, which we will get into in more detail later.

Packaging for black tea doesn’t provide data, so is difficult to determine the level of caffeine in black tea individually. Only soda and energy drinks can be definitively determined.

Caffeine is a natural stimulant found in coffee, tea, and chocolate. Some amount of caffeine intake can be considered beneficial. It leads to better focus, greater alertness, improved reaction times, and elevated moods. 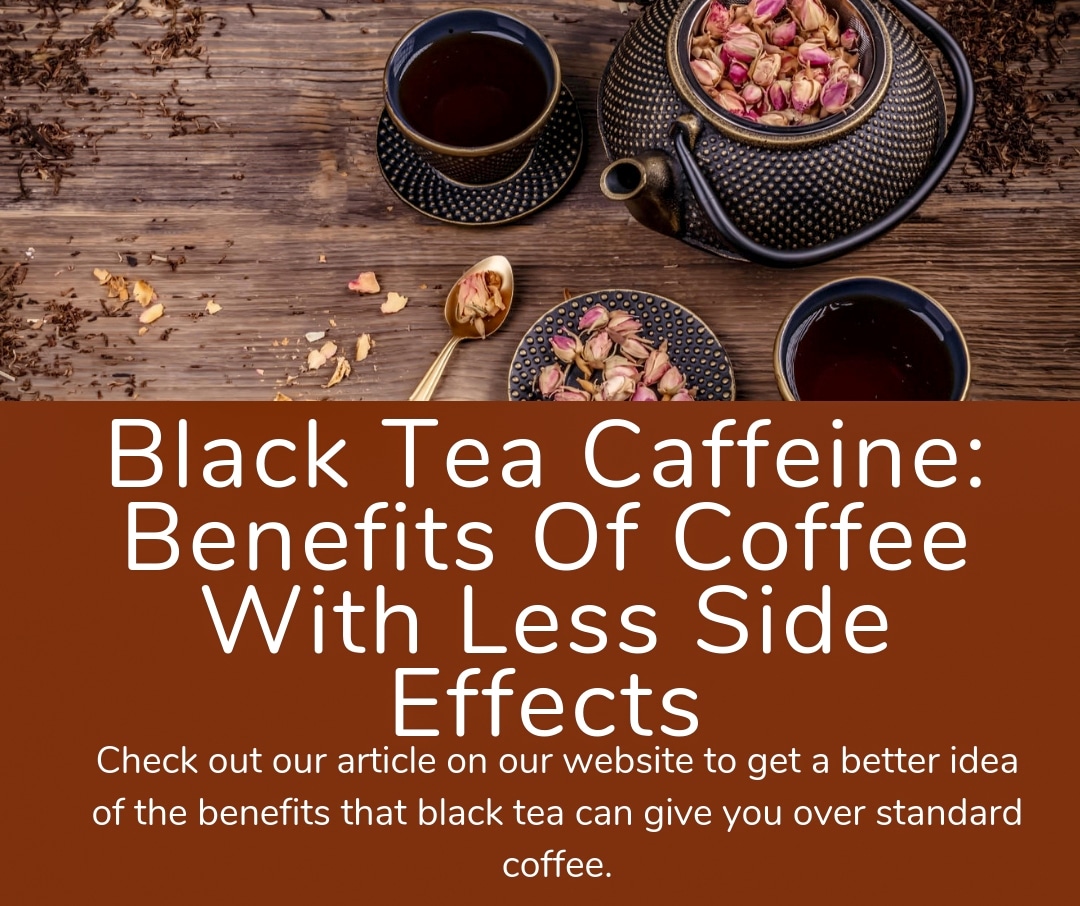 However, some people are very sensitive to the caffeine in black tea. For these people, or for people who have had too large a dose of caffeine, there are negative side effects. These can include headache, nausea, racing heart, anxiety, and an inability to sleep.

The FDA recommends limiting your caffeine intake to 400 mg each day. If you are experiencing any of the above symptoms, it may be wise to reduce your caffeine level each day.

The caffeine in black tea interacts differently in the body than caffeine in coffee does. Black tea contains an amino acid called L-theanine, which is a stress reducer and promotes relaxation. 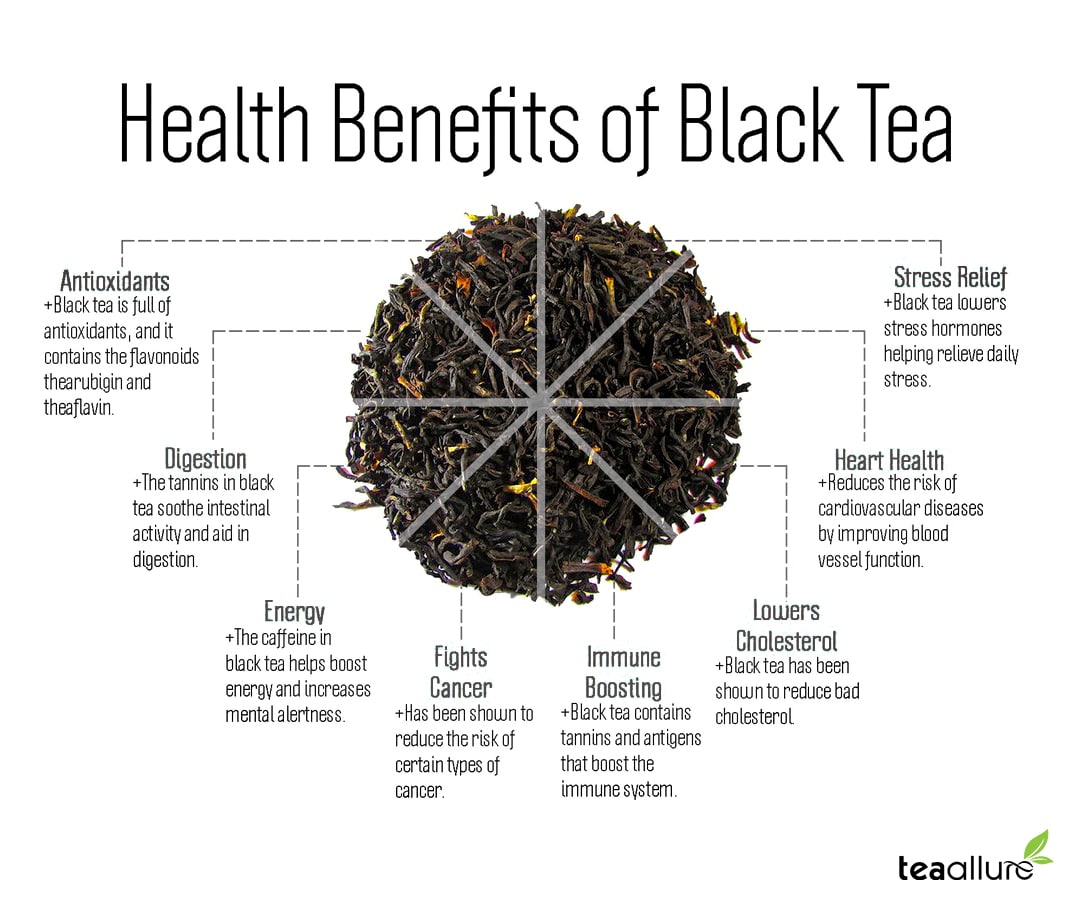 Once it’s ingested, the body is calmed at the same time it is perked up through the benefits of caffeine. Antioxidants also absorb the caffeine more slowly, thus extending the effects of the caffeine in black tea.

Because the antioxidants draw out the caffeine reaction, it also burns off more slowly. This leads to a tapering off of the effects, instead of a feeling of crashing. Black tea truly is a more soothing beverage than coffee.

Due to the fermenting process, black tea has a higher level of caffeine than other types of tea. Many different factors influence how much caffeine is contained in each cup of black tea.

One of the major contributors is the particular type of tea you are using, including its brand. The length of brewing time also influences the amount, so we will average the following brands’ caffeine levels at 5 minutes brewing time.

Each brand varies drastically. Lipton Regular black tea bags have 47 mg of caffeine while Twinings Earl Grey only has 25mg. This could be because Lipton is a pure black tea while Earl Grey is a blend. However, not all Earl Grey teas are the same.

One of the black tea brands with the highest amount of caffeine is Tazo Awake. It really lives up to its name, with 61 mg of caffeine. Other blends, such as Twinings English Breakfast, average between 25-30 mg.

Factors Influencing the Content of Caffeine in Black Tea

No two cups of tea have the same amount of caffeine. Many factors influence this. The brand you use, where the leaves originate, even the steeping time all affect how much caffeine is in your black tea.

We’ve already established that black tea has the most caffeine of all teas and that it varies from brand to brand. When brewed the typical way this holds true. 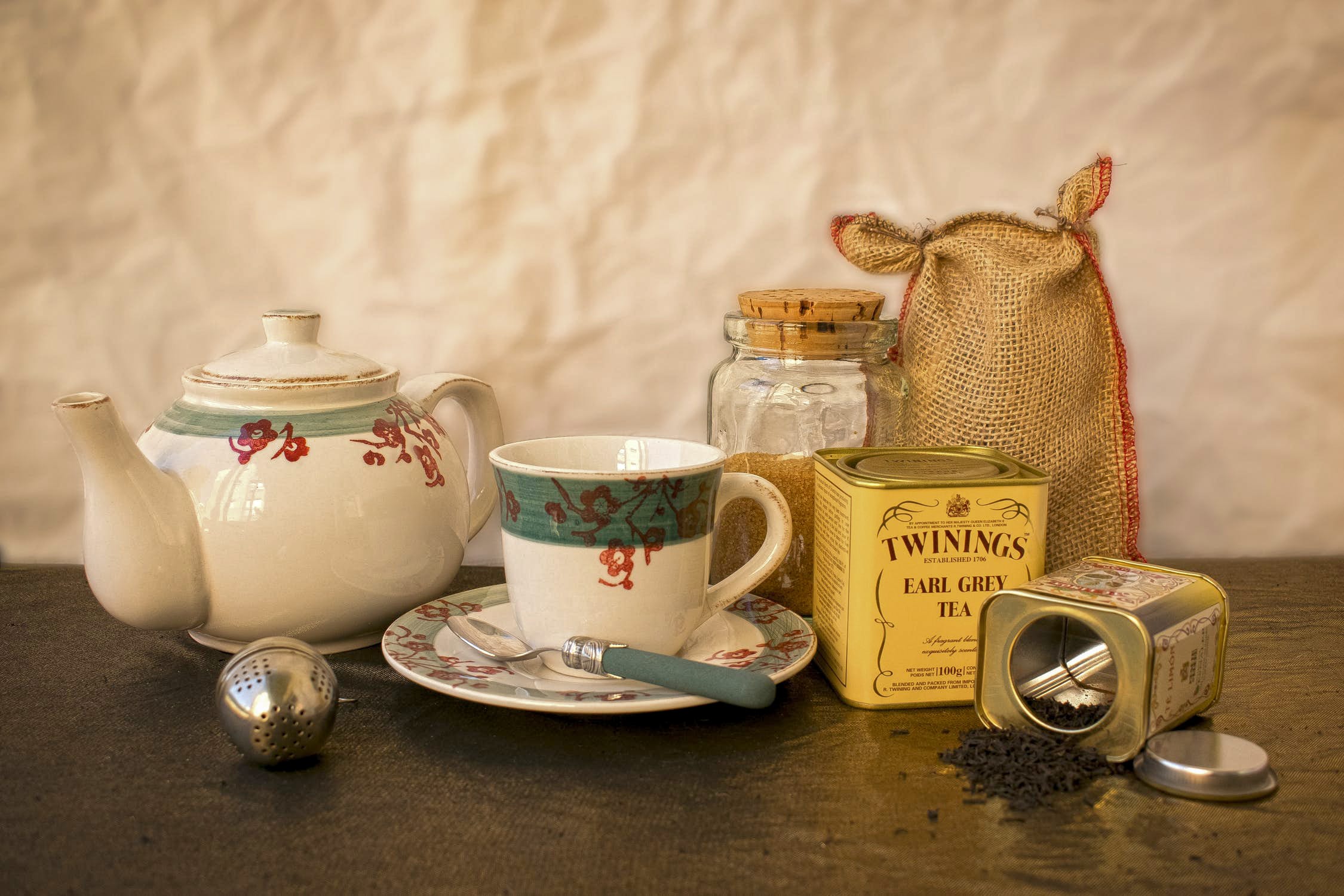 However, if certain teas are brewed substantially different from their typical way, generally held caffeine rules can be altered. It would be possible to produce green tea with more caffeine than caffeine in black tea (more on that in a moment).

The grade of the leaf is another factor to consider. Tea bags have greater caffeine content than loose tea does. This is because the tea leaves have been cut and ground. Broken leaves release their caffeine more quickly and can brew faster.

Sometimes a tea leaf is twisted or rolled in production. This will cause the tea to release the caffeine at a slower rate than a flat-leaf does. Whether or not the tree from which the leaf came was grown in the shade can also have a lasting effect.

How You Prepare It

The number of leaves and how long you steep black tea has a direct effect on how caffeinated your cup is. More leaves, soaked for a longer period, equal more caffeine in black tea. 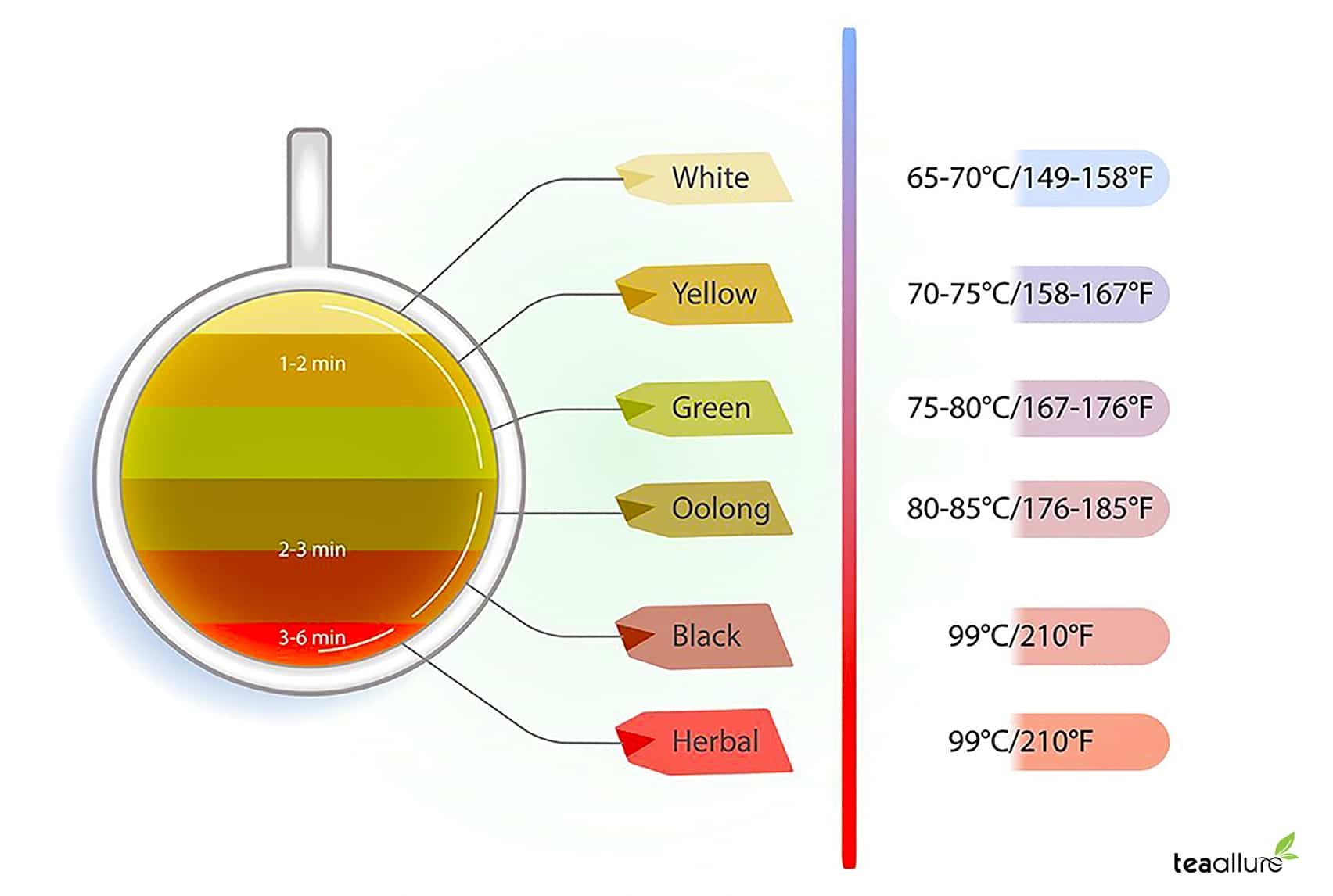 Water temperature is also an important factor. The hotter the water you use, the more caffeine you will release. However, not all teas taste their best at hotter temperatures. Be sure you check recommended brewing instructions for how hot your water should be.

Part of The Plant Used

This is not something that is in control of the consumer but will still influence what you drink. Different parts of the plant are used when making tea, and each part contributes varying amounts of caffeine in black tea.

Younger leaves, or buds, contain greater amounts of caffeine than older, larger leaves. This is likely because caffeine is a natural insecticide, so the plant will produce more of it in the newer leaves to help protect them as they age. The younger leaves are also higher in antioxidants.

The stems of the plant are also used in certain teas. This part of the plant is naturally low in caffeine, so it will produce a lower-caffeine tea.

Caffeine in Black Tea vs. Green Tea vs. Coffee 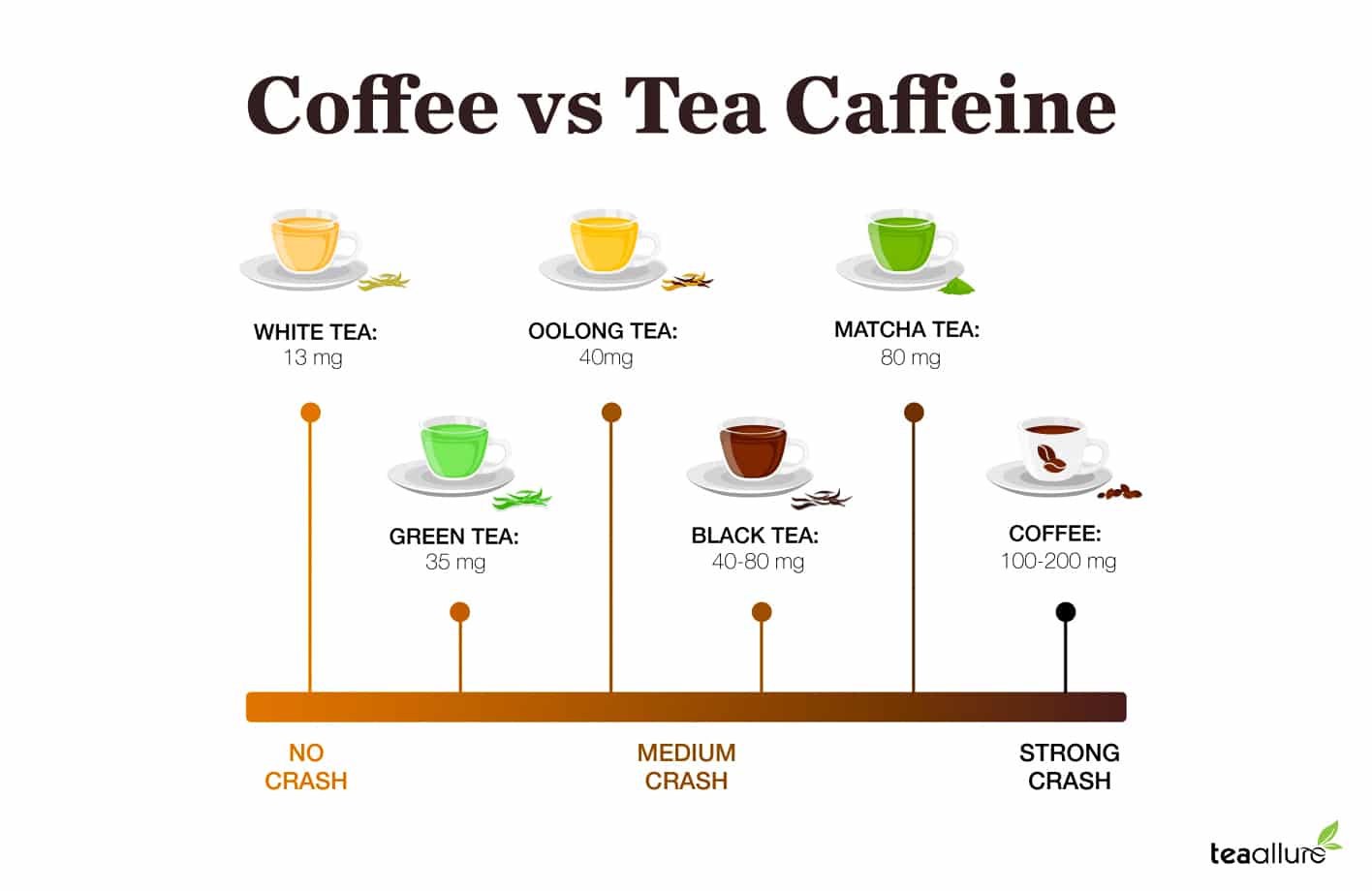 The water used in brewing coffee is typically hotter, which draws out more caffeine than the water used for black tea. Also, you use more coffee beans when preparing your drink than you would use tea leaves.

Just as different teas have different caffeine levels, so does coffee. For example, a dark roast is less caffeinated than a regular breakfast blend. Brewing methods also affect your final product, just as with tea.

Green tea contains the least amount (from the three) of caffeine. It can have up to 35 mg per cup. Though green tea leaves come from the same plant as black tea leaves, the preparation process is different. This plays a large role in what sets the two beverages apart.

Drinking black tea is a simple way to supplement your vitamin intake. It is an excellent source for vitamins A, C, E, though it is most essential for many B vitamins. Black tea is high in B2, B5, and B9.

B2 is also known by the name riboflavin. It helps regulate cell growth and function, as well as metabolizing iron in the body. It regulates your body’s energy supply and is important to skin and vision.

B5 helps to reduce cholesterol and triglycerides. It can also help your body recover from wounds more quickly and ease symptoms of rheumatoid arthritis.

B9 is commonly called folic acid. Folic acid is essential in maintaining proper cell function in your body. It helps keep your digestive system and your kidneys healthy, as well as promoting healthy skin and hair.

Also, it is such a vital part of our bodies that pregnant women are encouraged to increase their folic acid intake. It is critical in the formation of babies in the womb.

These vitamins are found in higher concentrations in black tea than most other foods, making black tea a rich dietary source.

Black tea contains approximately 5-7% of minerals. The essential ones with measurable amounts are potassium, magnesium, phosphorus, and sodium.

Potassium plays a critical role in maintaining healthy blood pressure levels and regulating electrolyte functions. It is also essential for muscle control, including your heart.

Phosphorus’s main role is to grow and repair your cells and tissue. It helps filter waste, regulate hormones, and aids in protein formation. Also. it is the second-largest concentration of minerals in the human body.

Sodium regulates blood pressure as well as keeps muscles and nerves properly functioning. It is also responsible for balancing the water level around your cells.

Most tea contains levels of fluorine, which the plants absorb from the soil. Fluorine is a chemical that can be either very beneficial or harmful to our bodies, depending on how much we absorb.

In lower doses, it can be invaluable for strengthening our bones and preventing tooth decay. It is not only beneficial for growing strong bones, but also in repairing damaged ones. Fluorine can also fight against viruses and bacteria.

In too high amounts, however, fluorine can have the opposite effects on your body. Excess fluorine will make your bones brittle, discolor your teeth, and make you ill.

Studies have shown that the levels of fluorine in the tea will vary, depending upon the variety and preparation process. However, no study has found any of these teas to contain levels that are considered dangerous.

Black tea is rich with flavonoids, which is excellent news for your heart. Flavonoids are a specific antioxidant that helps to reduce inflammation, which may help to deter plaque buildup in your arteries.

Flavonoids can help reduce your risk of heart disease and stroke, lower your cholesterol, and remove toxins from your body. High amounts of flavonoids may also help fight obesity.

Tannins are a group of compounds act as an antioxidant and lend black tea its slightly bitter taste. The more bitter your black tea, the higher the tannins.

Tannins have various health benefits, such as reducing chronic disease and promoting better health in general.

They also are an important component in promoting good stomach bacteria, which is beneficial in a healthy digestive system.