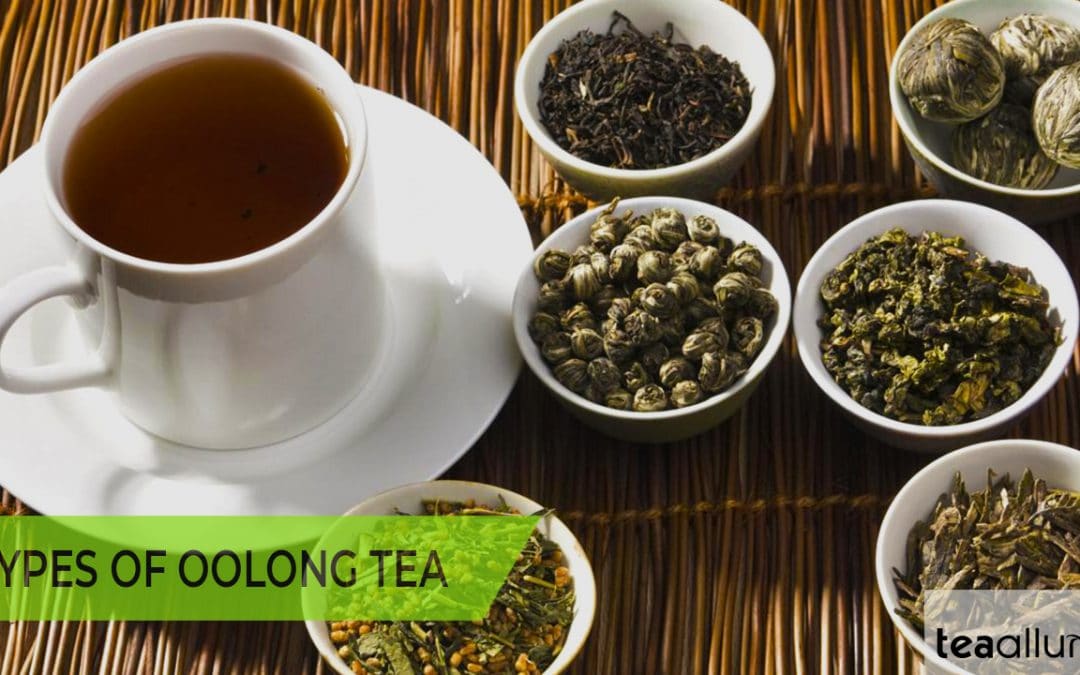 The majority of the oolong tea types belong to the most treasured teas in the world.

Their quality depends to a large extent on the person making it, as well as the amount of care taken during the cultivation process.

A simple mistake in the production methods may create an unpleasant aroma that can directly affect its taste.

When oolong is correctly produced, however, the result is a tea that improves with each steep in a way that green or black tea never can.

A good quality oolong tea can be steeped many times and may produce a different, more pleasurable taste experience with each brew.

Try this with English breakfast tea, and all you’ll end up with is brown water…

Oolong Is All About the Oxidation

Oolongs are sometimes known as ‘partially oxidized’ teas, and it’s easy to understand why. Oxidation begins the moment the tea is picked.

Farmers interrupt it at precisely the right stage of the cultivation method. Henceforth, the term ‘oolong’ applies to any tea whose oxidation falls between 8-80%.

Oxidation heats the oolong leaves. A prolonged oxidation process, however, produces a malty black tea with high levels of acidity.

Timing is crucial, but it’s not the only critical factor in oolong production. Oolong cultivation comprises methods and guidelines which you must follow.

It all depends on the amount of time the leaves need to wither. Then, it continues to the way they are mixed, blended, rolled, and pressed. All at specific humidity levels and temperatures.

These processes take place before the final roasting, after which most teas are fit to drink.

The cultivation of oolong tea is a process handed down over the centuries. However, it depends on the skill and knowledge of traditional oolong farmers.

As you can imagine, production takes several days. As a result, it involves a dozen of different phases. 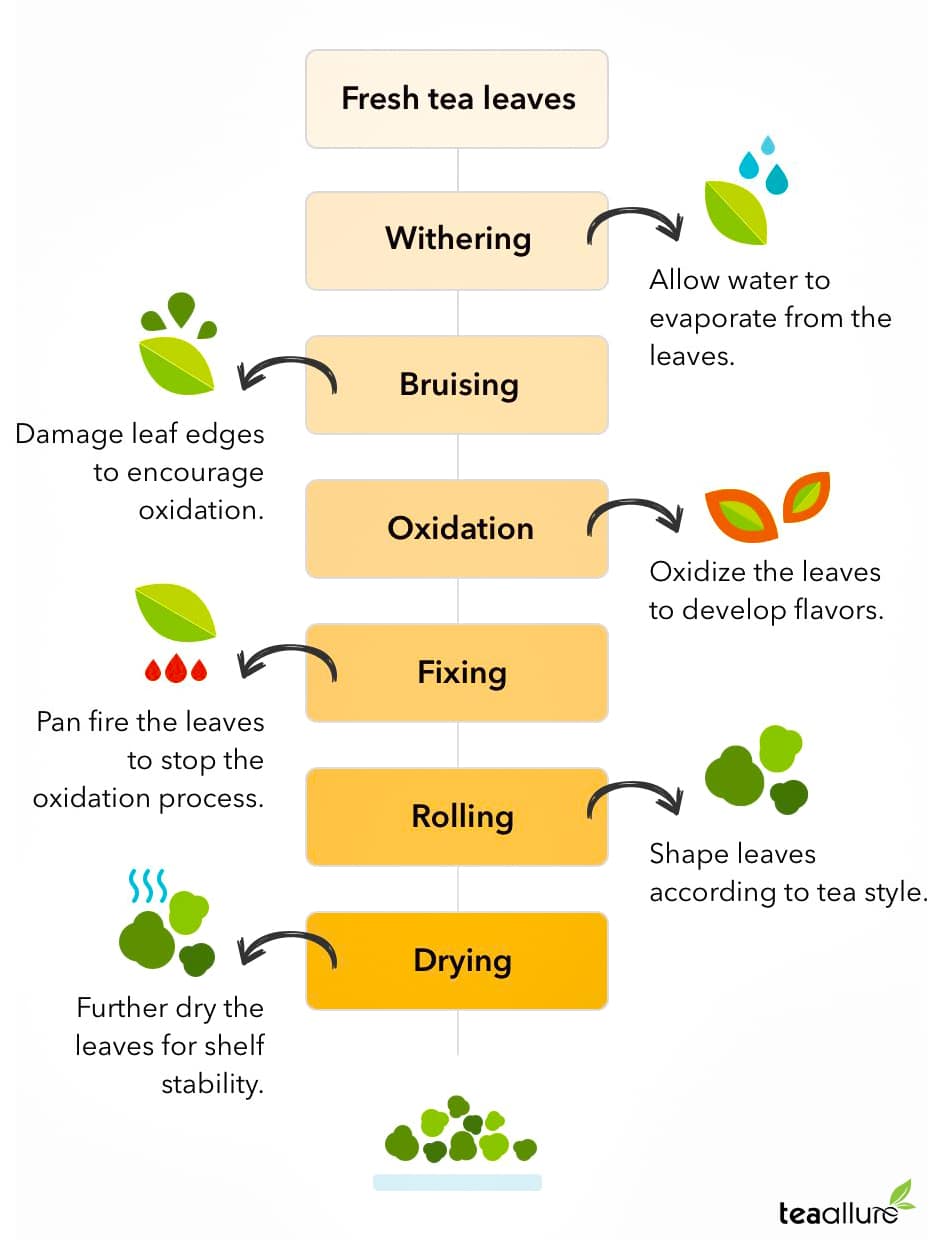 The water in the leaves vaporizes to the correct levels. Also, the tea must be precisely pressed and bruised. It allows the leaves to develop the desired taste and aroma, too.

By looking at the leaves, smelling, feeling, and touching them, expert oolong farmers know exactly which ingredients their teas require.

On the other hand, modern oolong producers are not above the usage of substantial machines and state-of-the-art thermoregulation instruments. It provides a reliable, quality, beneficial, and delicious product, by all means.

As an integral part of their culture, China and Taiwan are well-known as the main producers of oolong teas.

However, the teas from these two very countries differ in many ways. Besides, each has its unique taste, texture, and leaf shape. 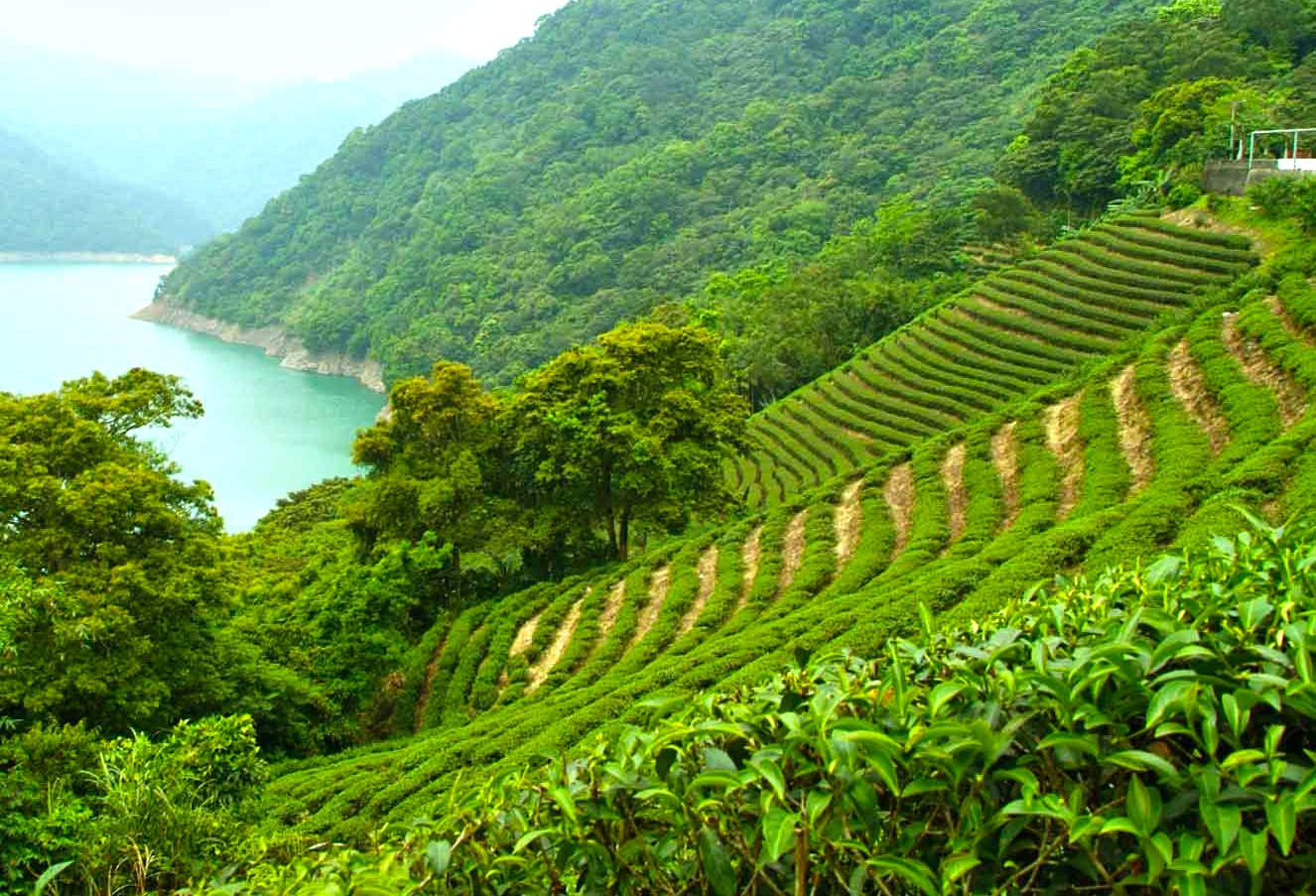 Depending on the type of oolong, the tea oxidizes between 8% and 80%. This process determines the color and flavor of the tea. Such is the variety of available oolongs it can be confusing to find your favorite.

So, to make finding the oolong tea you love the most a little bit easier, here is a short overview of the different types of oolong tea. It includes their region of origin and oxidation levels.

This is where the most expensive and exotic oolong teas are produced. Labeled as ‘famous Chinese teas’ or Si-da Ming Cong Teas, they are one of the most famous Wuyi Oolong teas.

The location is also accredited for its traditional, organic production methods. Here are some well-known cliff teas:

A group of oolong teas from the Guangdong Province. Dancong teas have a natural ability to mimic the flavors and aromas of a variety of fruits and flowers. It can be orchid, grapefruit, orange blossom, ginger, ginger flower, and almond, plus many more.

Dancong was originally the term used when people referred to Phoenix teas that were all picked from the same tree.

More recently, however, it has become the term used for all of the Phoenix mountain oolong teas. Authentic Dancongs, while still produced, are no longer common outside of China. 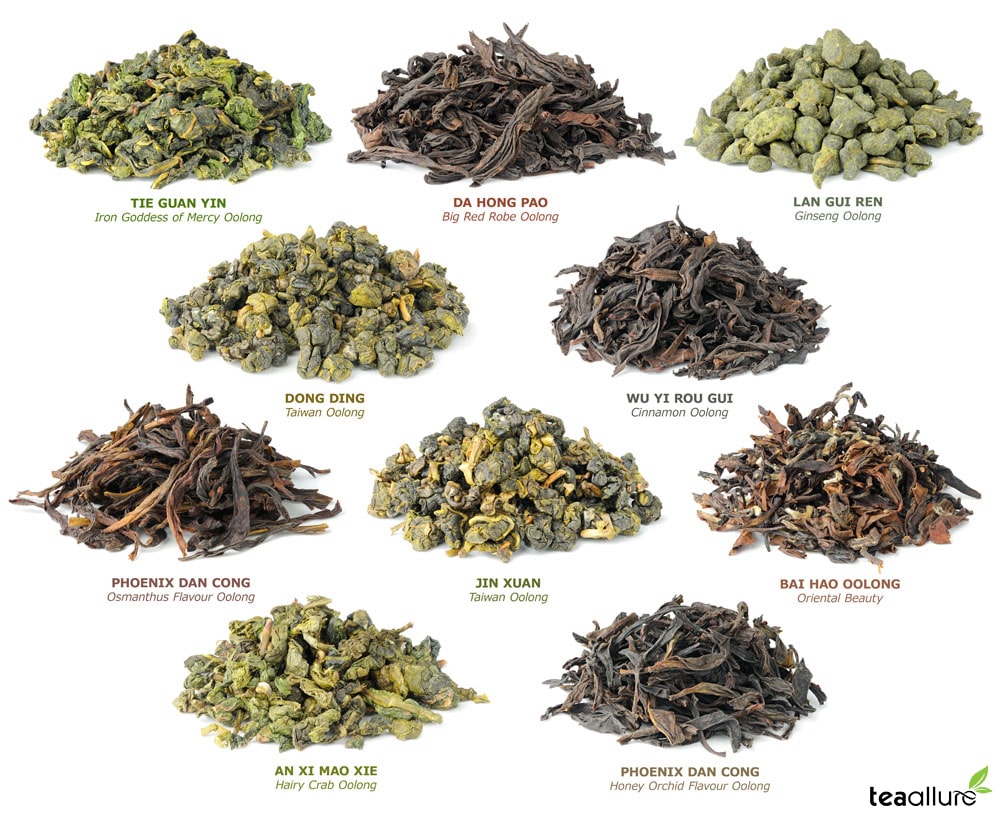 In the 18th century, the cultivation of tea began in Taiwan. Nowadays, many of the Fujian grown teas are also cultivated in Taiwan.

Since the 1970s Taiwan’s tea industry has advanced rapidly to keep in step with the rest of its economy.

After all, Taiwan has such a tea-loving culture and a very high domestic demand. Thus, most of their tea production is bought and consumed by its population.

Because the weather in Taiwan is very unpredictable, the quality of their tea can vary with each season. Taiwan is not a very large island, and it has many geographic variations. Frequent mountains tower above very low coastal plains.

The varying weather, temperatures, and differences in soil per region lead to a huge amount of aromas and flavors of Taiwan tea.

Varieties that grow in very highly elevated areas are known to produce a unique, sweet tea that carries quite a hefty price tag.

For centuries, tea has played a significant role in Vietnamese culture. And its no wonder.

The climate in Vietnam is ideal for cultivating tea, and the country has excelled as a producer for both domestic and international consumption.

If it hadn’t been for Vietnam’s tragic history of armed conflict, the country would today be one of the major tea produces in the world.

Thankfully, this situation has now changed, and Vietnam is well on its way to becoming a major player in the global tea industry. 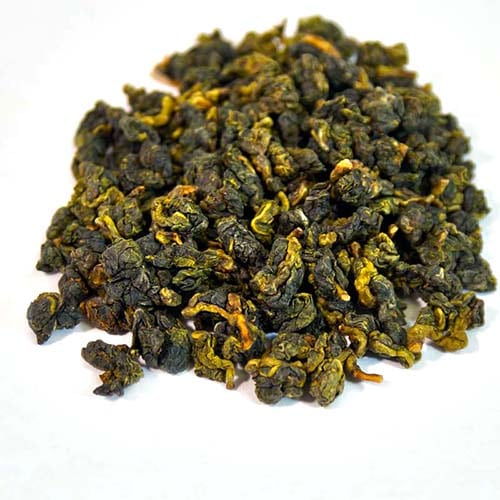 As with other oolong tea types, the Vietnamese oolong uses the larger leaves of the plant, unlike other teas that focus solely on the bud.

Vietnamese oolong traditionally relies on its century-old craftsmanship to create a host of high-quality teas.

One of the most famous Vietnamese oolongs is the curly-leafed, dark green Imperial variant. Once infused, this tea turns light green.

It is a tell-tale sign of low oxidation levels and produces a tea with the soft and sweet nuances of honey.

Other notable varieties include:

The diversity of oolong is enormous. The tea is not only sorted into different types but also different categories. Some of the most notable groupings of oolong tea include monkey picked and milk oolong tea.

Discovered in the 18th century in Fujian province, monkey picked derives its name from a folk tale. It claims that local monks train monkeys, native to the mountainous region, to pick the tea from the highest branches. 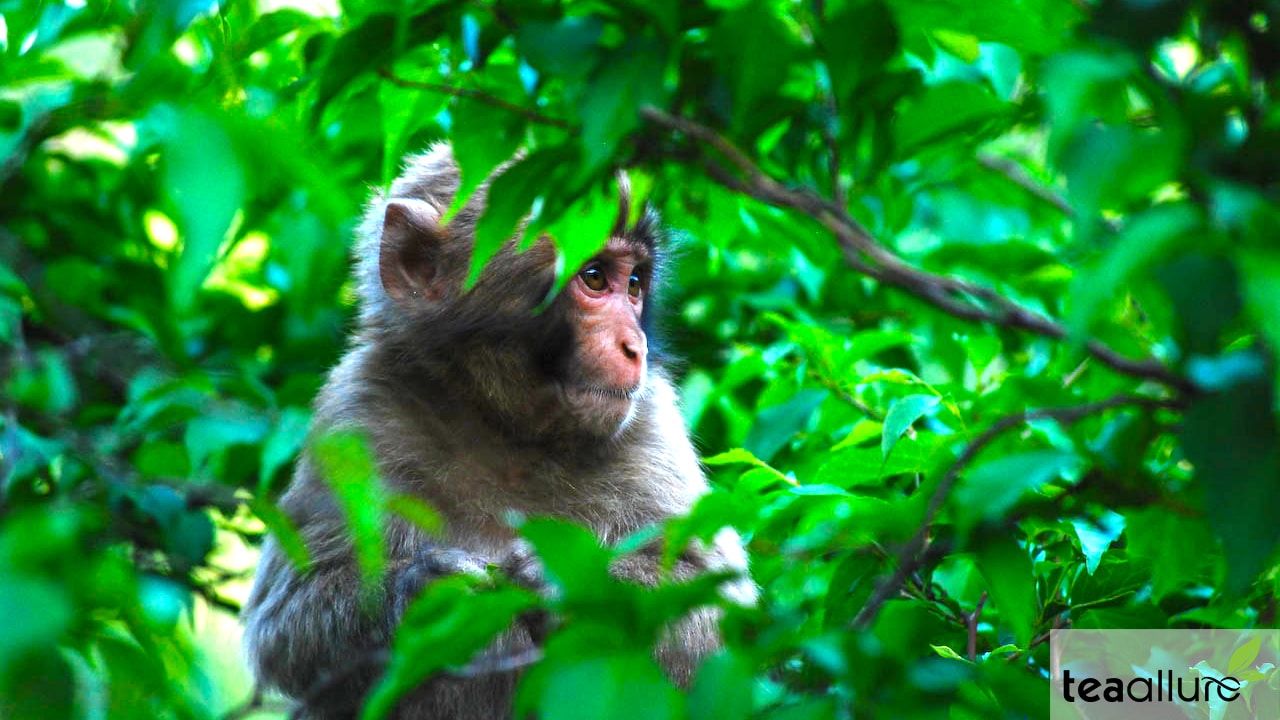 The term later evolved to mean tea of the very highest quality. Monkey picked teas are among the most authentic oolong teas. It is still produced on a small scale and prepared by traditional family tea handlers.

The most popular monkey picked tea is the Tie Guan Yin (Tieguanyin) which is also among the rarest oolongs in the world.

The title ‘milk oolong’ tea type comes from the tea’s floral aroma and its milky sweet taste. However, it should not be confused with intentionally adding milk into your tea.

Milk oolong has gained popularity as one of the most delicious oolong teas. That is thanks to its light yet flavorful taste. One of the most famous tea in this category is the Jin Xuan oolong which originates from Taiwan. 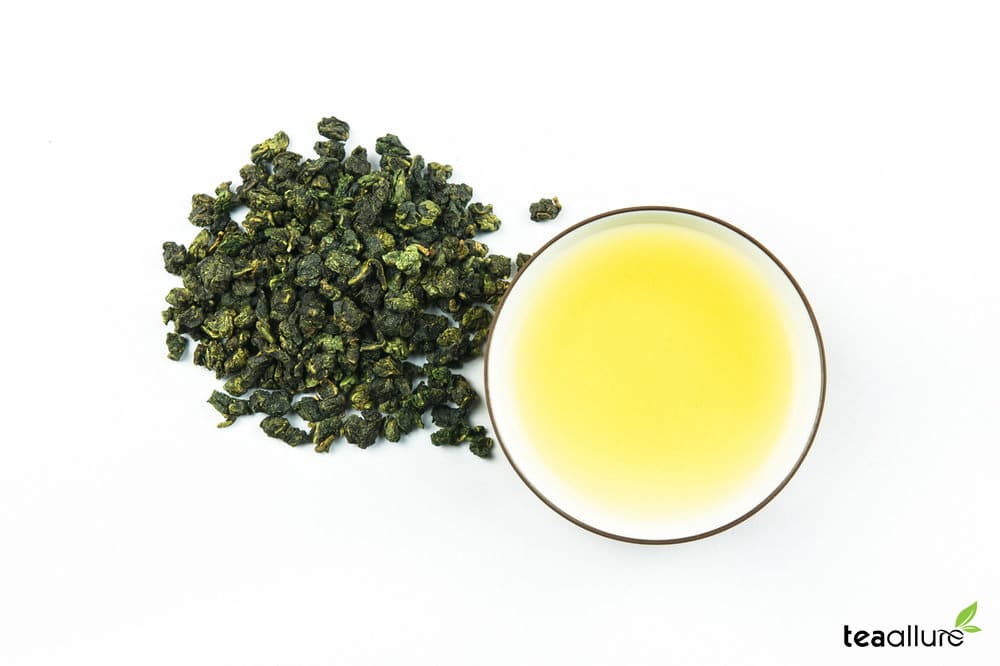 The oxidation process of milk oolong twists the leaves and gives them the dark green/brown color. Once the tea master is satisfied with the level of oxidation, the leaves are heated to stop the oxidation.

This process repeats a number of times until it reaches the desired result.

It should come as no surprise that the best oolongs grow in harsh, mountainous regions.

The location of the plant plays a crucial role in the nutritional facts, producing the unique flavor the tea acquires after oxidation. T

he best creamy teas benefit from the environmental conditions of their surroundings to fully develop their aromas and flavors.