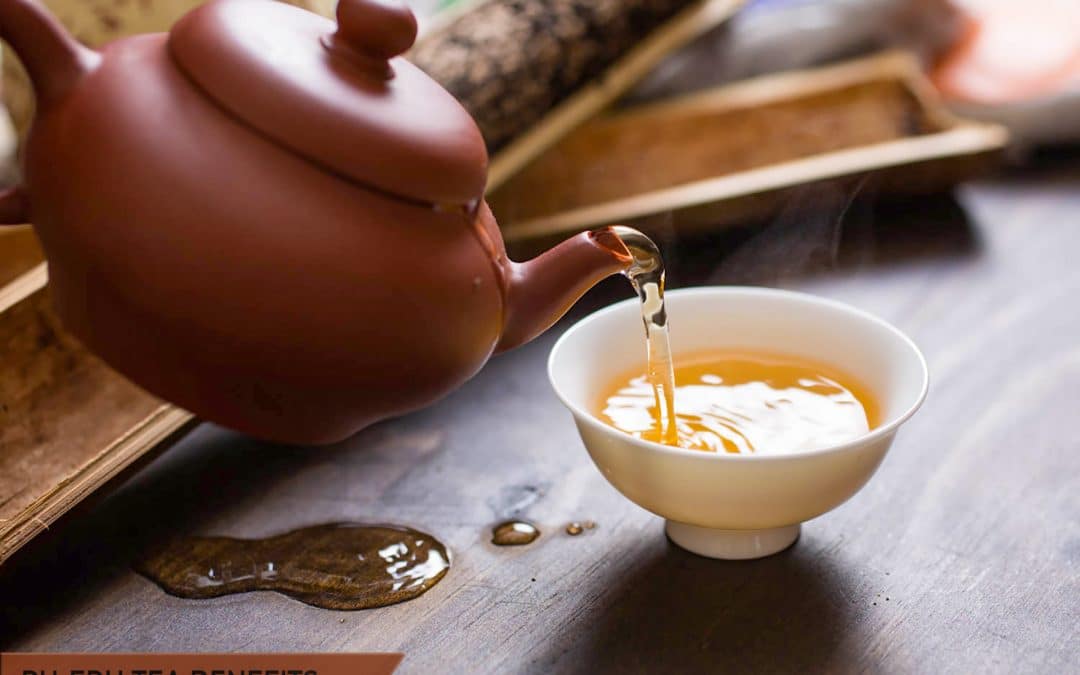 With its smooth, mild flavor and an aroma reminiscent of autumn leaves, Pu-erh is one of the most enjoyable teas.

Its high caffeine content makes it both an excellent morning beverage, as well as a refreshing afternoon pick-me-up.

What makes Pu-erh tea interesting is the secondary oxidization that occurs during the fermentation process.

This process releases a high concentration of polyphenols and flavonoids. It produces powerful, antibacterial characteristics.

Pu-erh tea leaves are fermented in an extremely humid environment, which causes natural bacteria and fungi to multiply. That is what gives the tea such an amazing array of health-promoting qualities.

From curing hangovers to preventing cancer, people use Pu-erh around the world as a natural remedy for a whole range of ailments. But there is another reason a lot of people start drinking this wonderful tea. Its reputation as an effective weight-loss supplement. 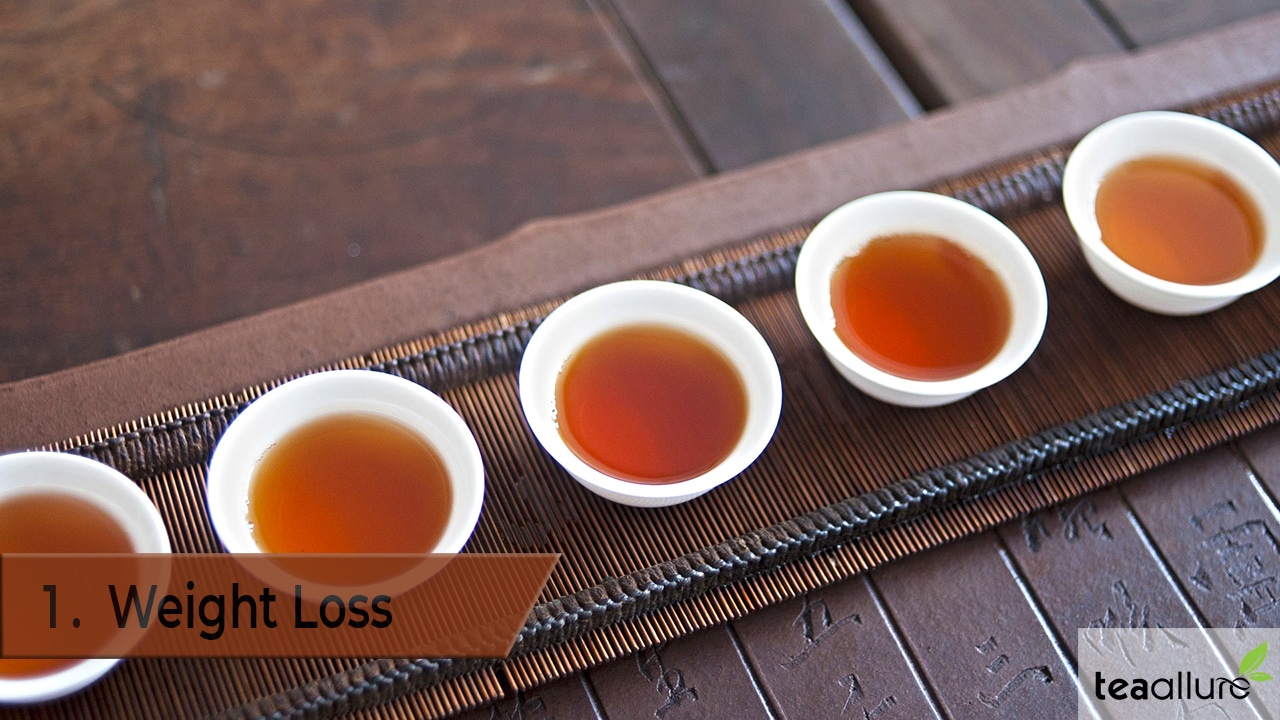 Perhaps the most exciting quality of Pu-erh tea is its ability to help people lose weight. Pu-erh’s capacity to accelerate digestion makes it the perfect supplement in any weight loss regime.

Fat moves quicker from the stomach to the colon. Besides helping people shed excess pounds, the tea eases stomach ailments and promotes healthy gut bacteria too.

A quick online search will bring up plenty of Pu-erh tea weight loss reviews written by real people. Here are just a few: 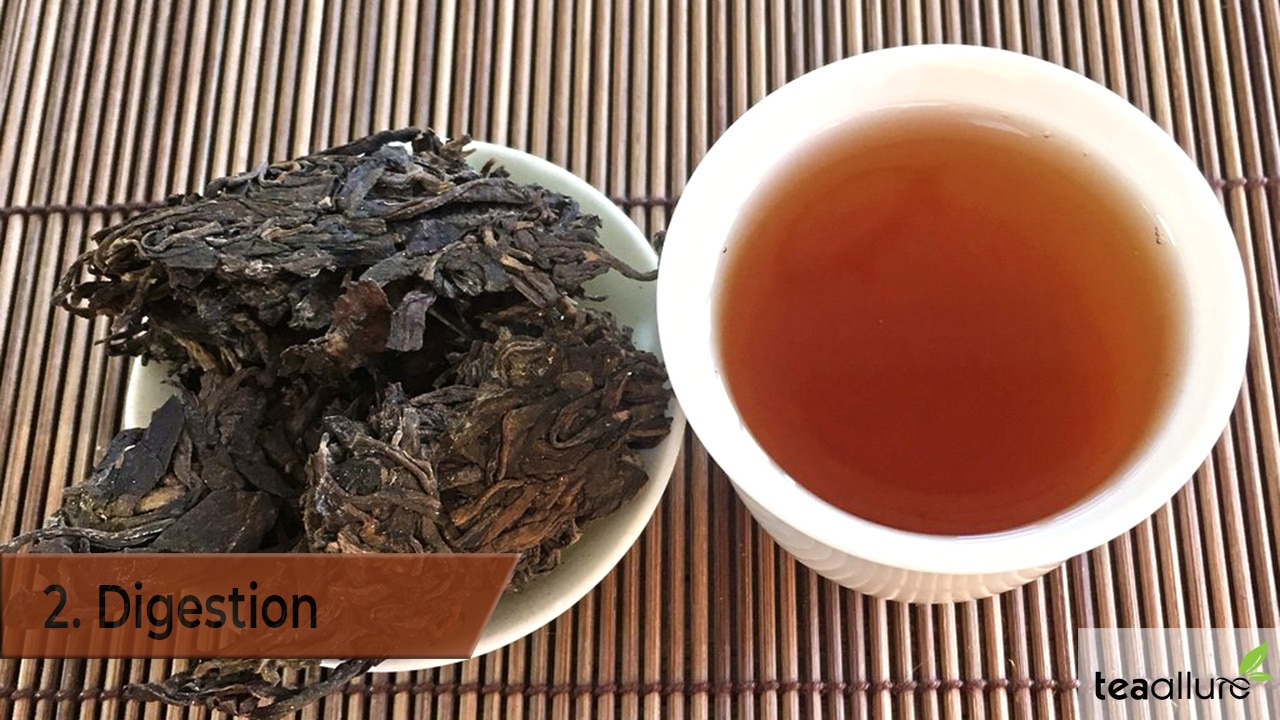 Pu-erh is great to drink after a heavy meal. The antioxidants in Pu Erh support healthy digestion by speeding up the body’s metabolism. Fat is removed from the body faster, and excess acidity dissolves quicker. [1]

Just one cup of this amazing tea can bring fast relief if you happen to have over-indulged at the dinner table. 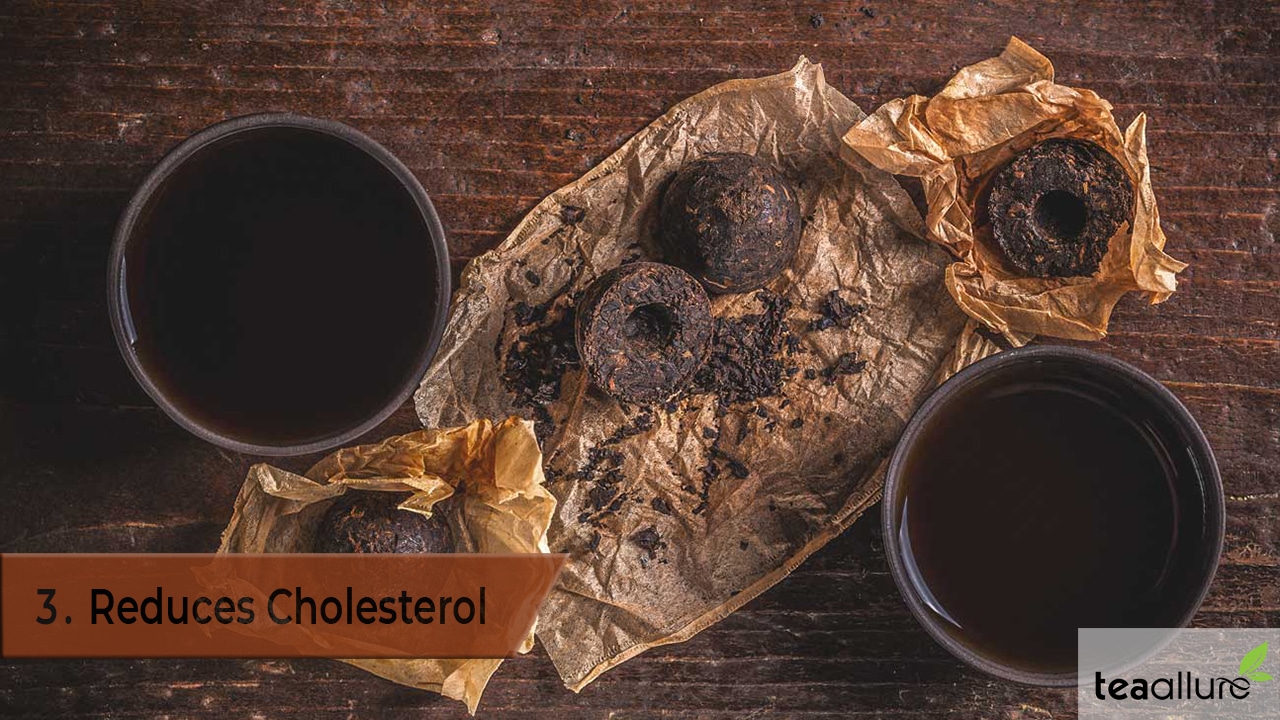 Drinking Pu-erh helps the production of lovastatin, a natural statin widely used to reduce high levels of cholesterol. It also fights LDL, or bad cholesterol, and aids the prevention of diseases related to obesity.

Simultaneously, Pu-erh tea can increase good cholesterol[2].  That’s why scientists praise it for lowering the risk of some heart conditions. 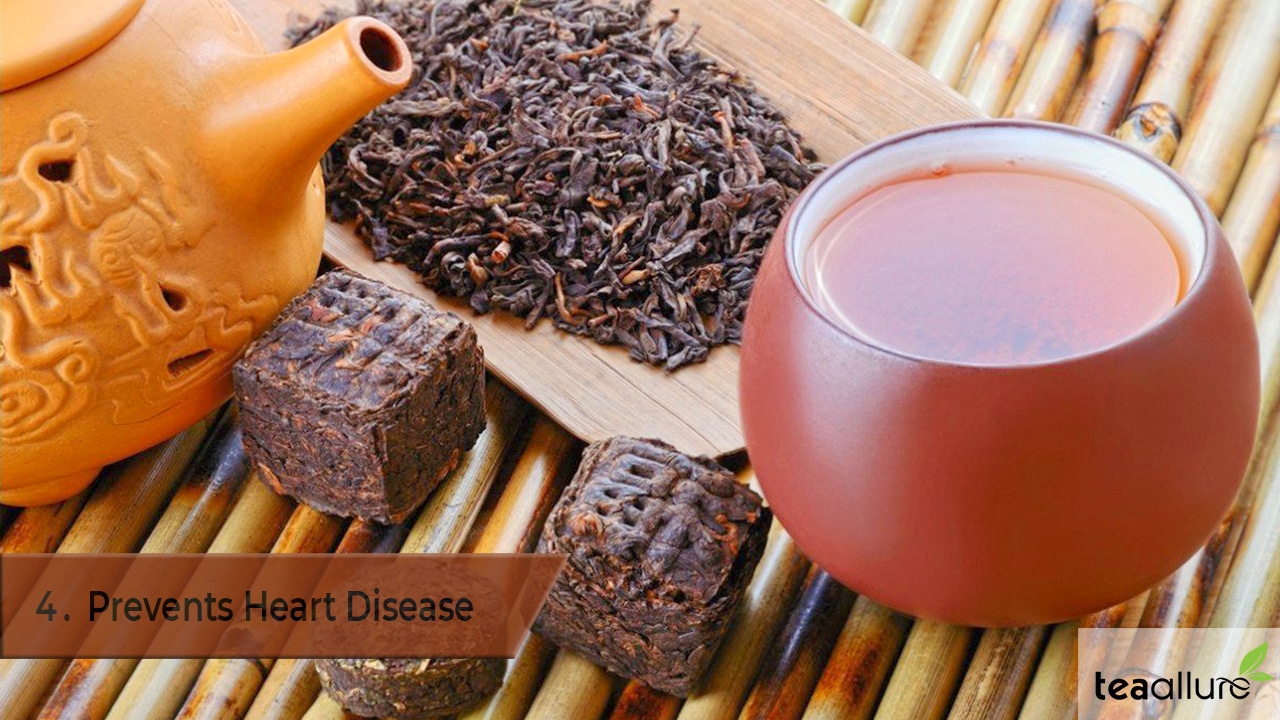 The microbial aging of Pu-erh tea promotes the production of lovastatin. Hence, it is often used in the treatment of LDL cholesterol.

The more the tea is aged, the higher the levels of lovastatin it contains. In fact, just one cup of well-aged Pu-erh tea a day can significantly improve your cardiovascular health.

Studies have shown that regular Pu-erh tea consumption, even without other dietary changes, lowers triglyceride levels.

Particularly because triglycerides store fat in the body and play a role in heart disease. 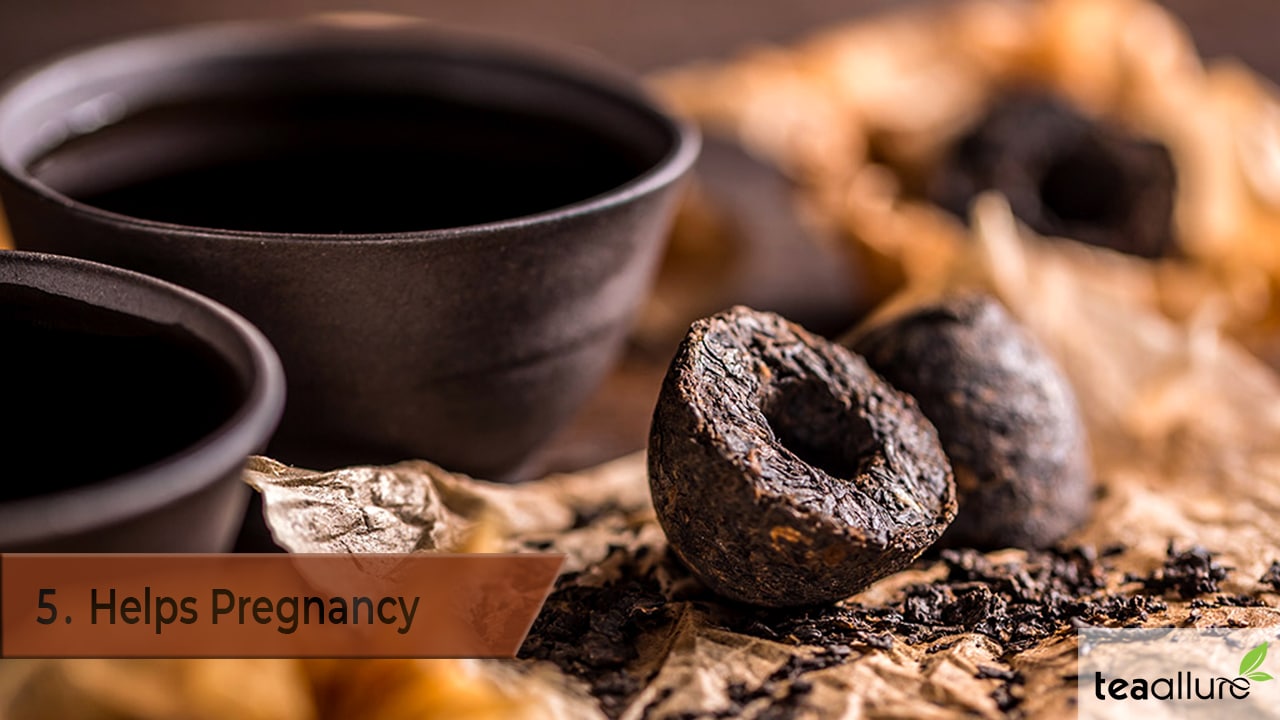 While there aren’t many studies on drinking Pu-erh during pregnancy available, small amounts are considered safe.

In general, pregnant and breastfeeding women are advised not to drink more than two cups of tea per day.

Concerns have been raised regarding the high caffeine content in Pu-erh tea. And while it contains less caffeine than coffee, it can still cause sleep disturbances. Irritability and increased blood pressure have also been reported.

Claims that drinking Pu-erh tea during pregnancy is unsafe are very rare, but consumption should be limited.

If you’re breastfeeding, remember that caffeine passes into breast milk. When in doubt, always consult your doctor. 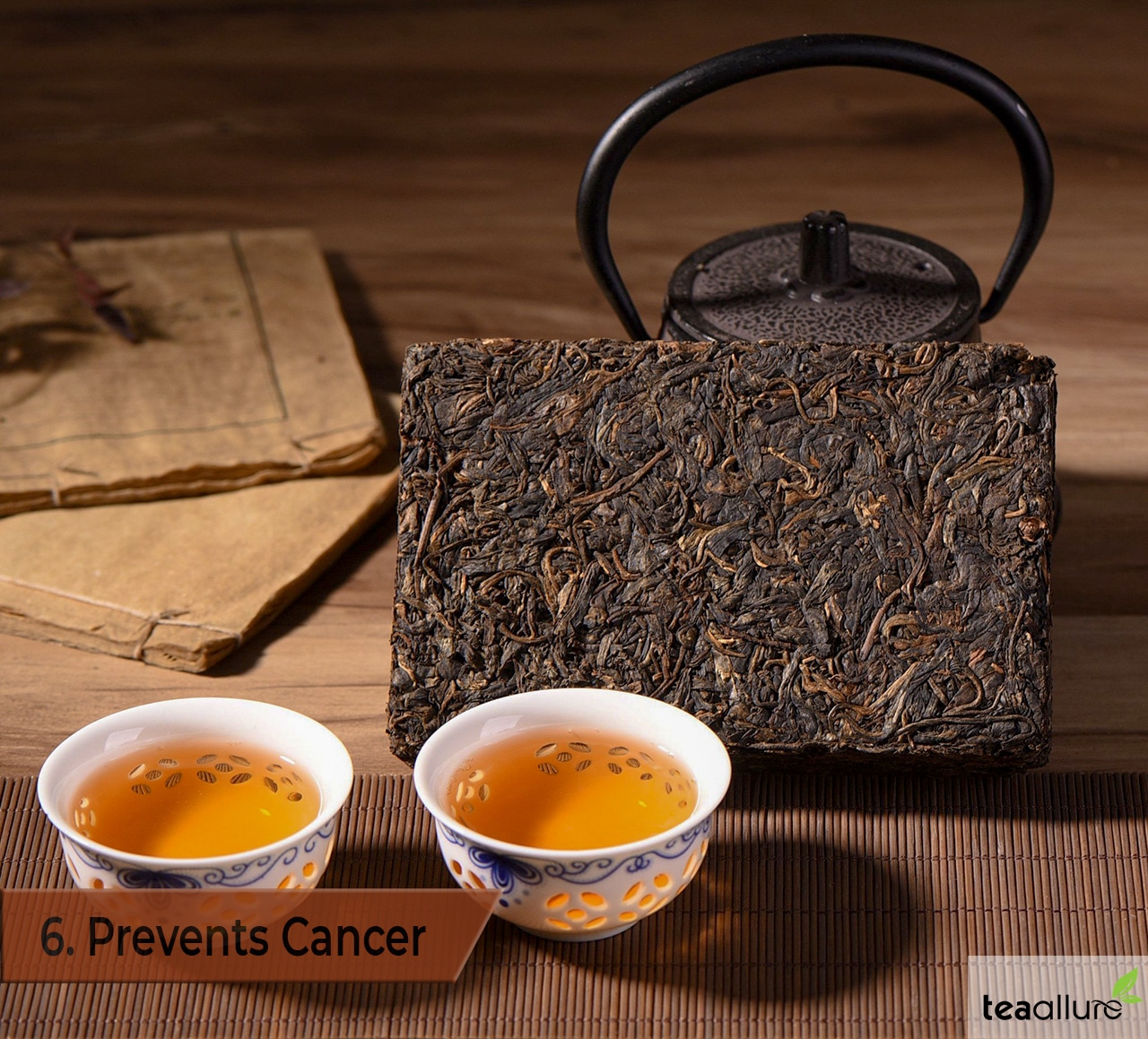 A recent study looked at the impact of Pu-erh extracts on the genetically modified tumor cells of mice. Researchers found that the oxidized polyphenols in Pu-erh helped slow down irregular cell production.

The conclusion is that the tea may have a possible application in cancer treatment. 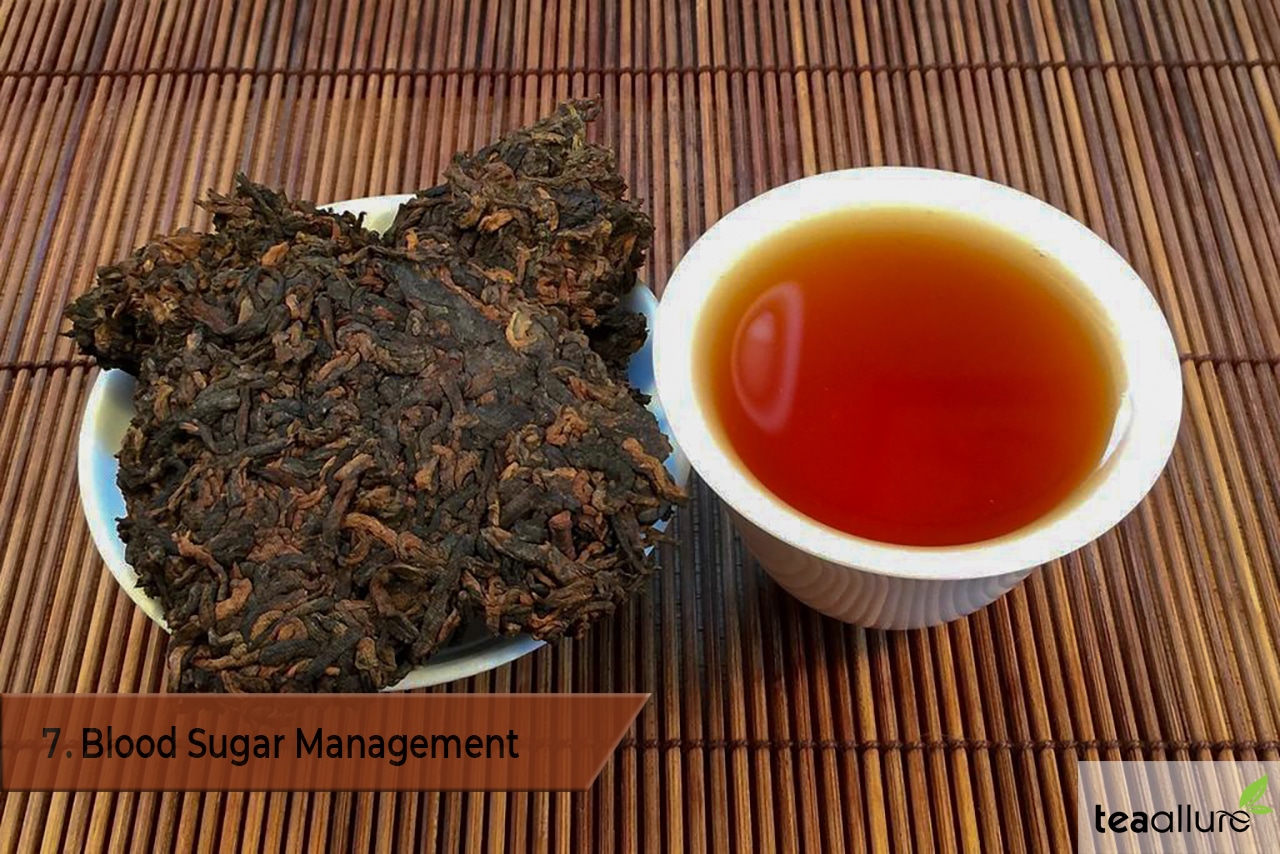 Studies in mice have found the polysaccharides in Pu-erh tea to be beneficial in Type-2 diabetes. Another study asked human diabetic volunteers to stop their medication and just drink Pu-erh tea.

They were also instructed not to stick to their usual diets. Seventy percent of the volunteers saw an average blood sugar decrease to below 7 mmol/l.

Scientists at Jilin University found that the impact of Pu-erh tea in rats compares favorably with that of Rosiglitazone. This is a widely-used diabetic medication.

The researchers found that after two weeks, rats that were given Rosiglitazone showed a 36% reduction in blood sugar levels. In the same study, however, rats given extracts of Pu-erh tea saw blood sugar levels fall by over 42%. 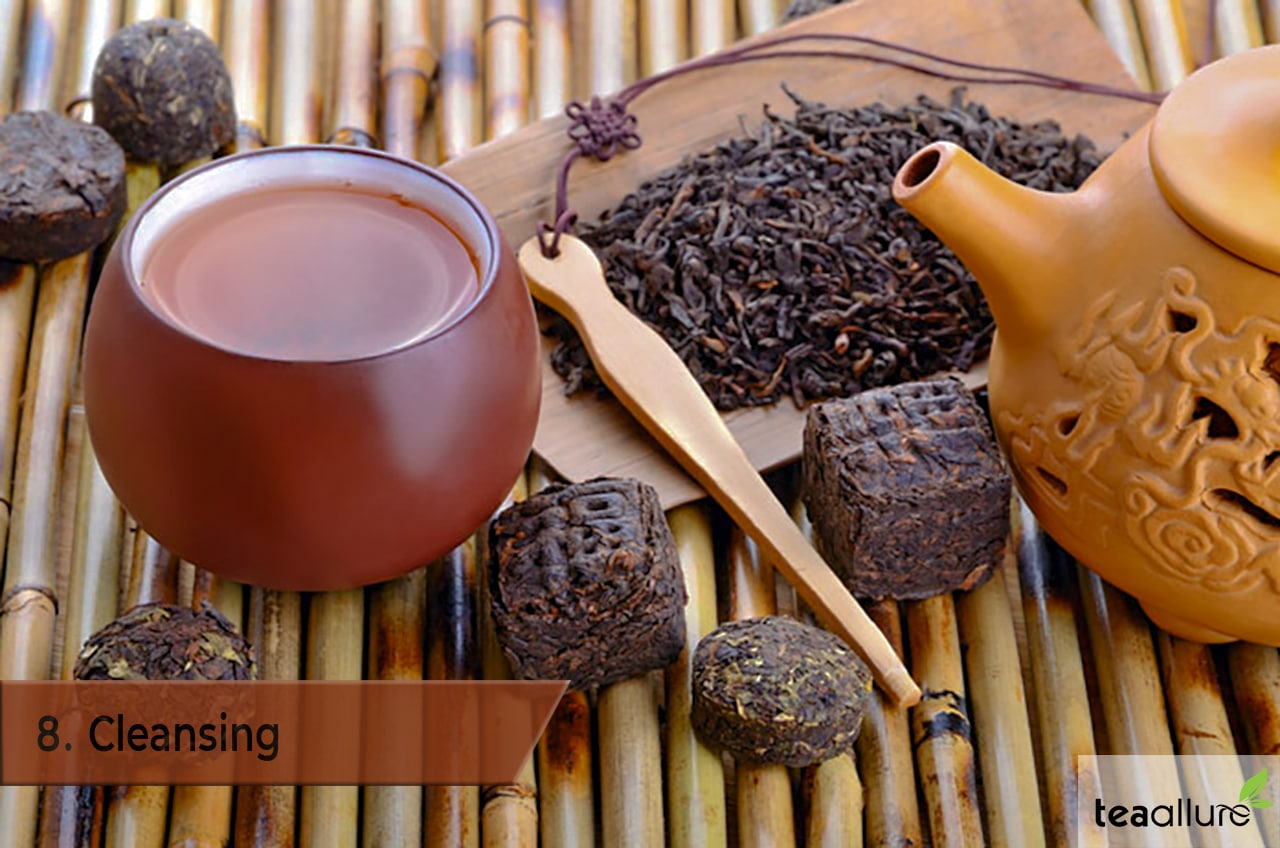 A hearty cup of Pu-erh after a boozy night out can help minimize the effects of alcohol. For instance, in traditional Chinese medicine, tea is often used to cleanse the body of toxins, including alcohol.

Many Chinese say that it’s the best cure for a hangover. There aren’t really studies to substantiate this claim. But the fact that it speeds up the metabolism may indeed create a sobering effect. 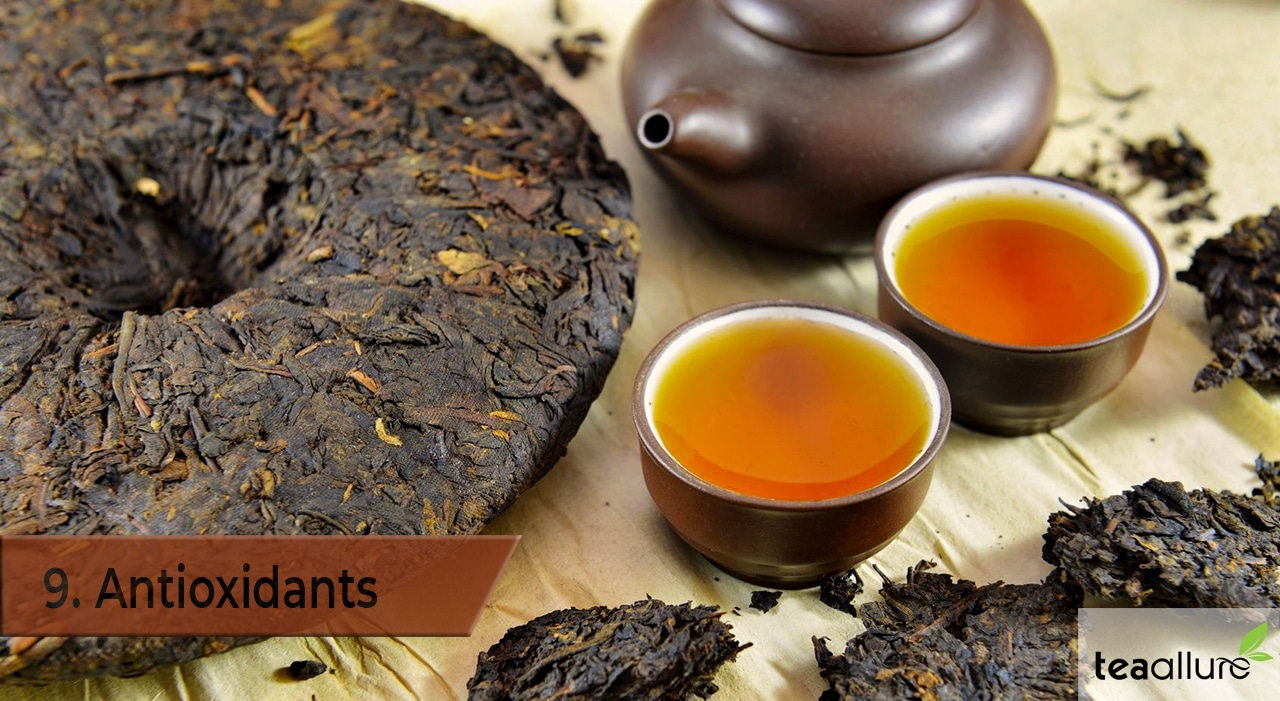 The oxidative properties of Pu-erh help to improve oxygen levels in the body cells. This enhances circulation and more oxygen is delivered to the brain, which helps ease headaches.

Even migraines are said to improve with the consumption of the tea on a regular basis. 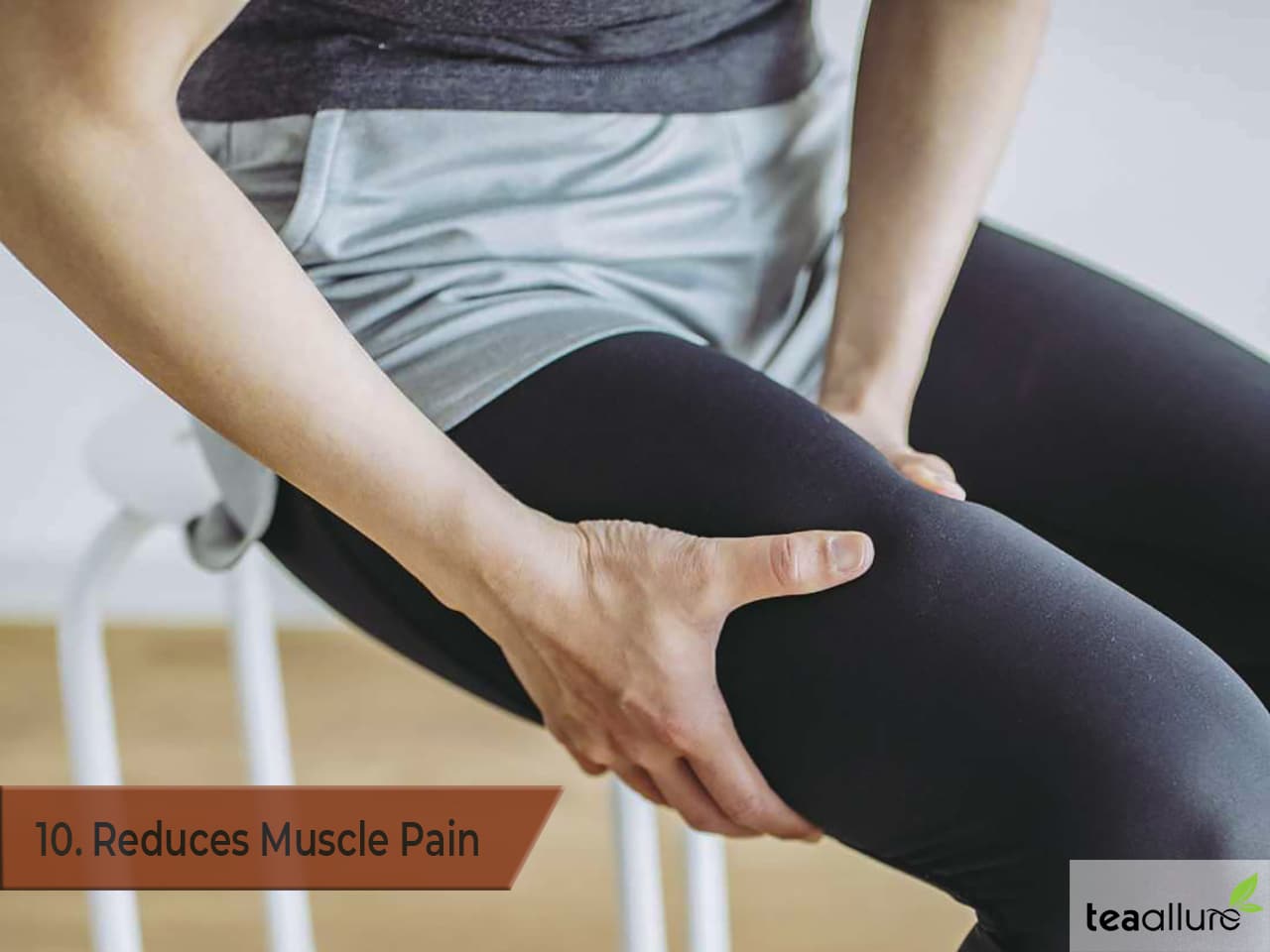 Pu-erh’s anti-inflammatory effect helps to reduce muscle pain, swelling, and irritation of the skin. It can be applied topically or even added to your bathwater.

Drinking the tea can also soothe some arthropathic conditions, such as arthritis and gout.

If you are drinking the Pu-erh for weight loss, it’s best consumed about an hour after meals. Ideally, you should exclude all other beverages from your diet. Sip plenty of water throughout the day as well.

Weight reduction is maximized when Pu-erh is included in a healthy diet and exercise program.

However, some people claim that drinking Pu-erh tea for weight loss makes them feel hungrier than normal. One reason for this is that the tea speeds up metabolism. 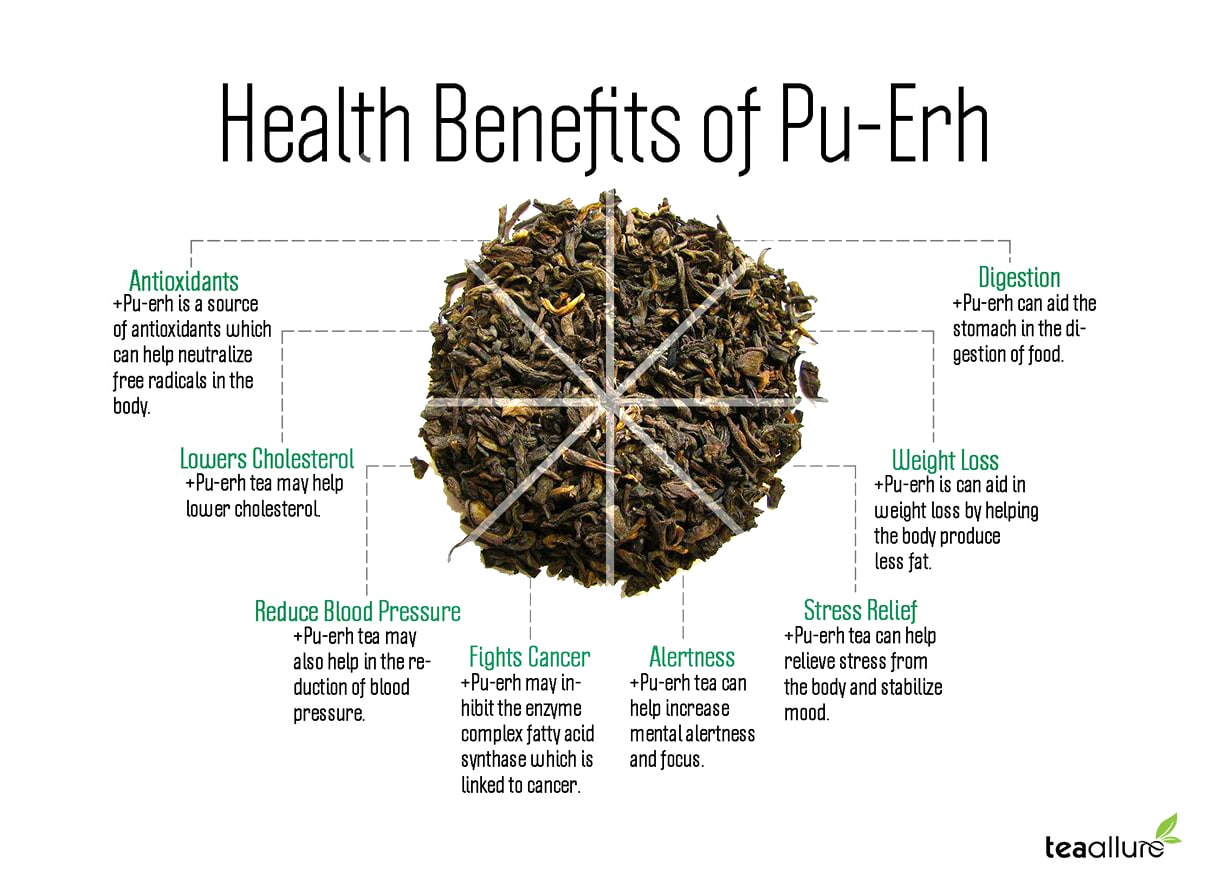 Another reason is that Pu-erh boosts the production of epinephrine and norepinephrine. These help the body reduce its levels of stored fat. Therefore, adding a little extra lean protein to your diet can help you feel full for longer.

Eat several small, healthy meals throughout the day. These may include salads, steamed vegetables, fresh fruits. Avoid having your last meal late at night and try to finish eating in the early evening.

If you still feel hungry, snack on vegetables and fruits. In addition, always consult a medical professional before you begin a diet.

Aim to lose weight gradually. Like any weight-loss method, drinking Pu-erh tea does not produce miracles overnight. It takes consistency and discipline before you reap the rewards.

A staple of Chinese medicine for centuries, recent times have seen the West slowly awakening to the benefits of Pu-erh.

There can be no doubt that drinking tea as part of a healthy diet can produce some amazing results.

As a matter of fact, it is a powerful and effective ally in the battle to lose weight. Add to that its delicious taste and comforting aroma, and you really do have a tea for life.